Yesterday the media giant announced that they would no longer carry White Nationalist Content on their site. I have no illusions that my little protest had any impact, but never the less,  I am going the full 17 days without Facebook . One for each minute they live streamed murder. But, I think they still miss the point.

If not, then why not ban all hate speech, and be extremely vigilant about what live streams? Which in turn could create jobs all over the world. Take a firm stand against all forms of intolerance and hate.

I am just one person, yet certain that many more people are outraged over Facebook's lack of over-site when it comes to violently disturbing content. I don't care what people believe or what god they pray to, but I insist on non-violence.
Posted by MDRansom at 5:56 AM No comments: Links to this post

My challenge to myself to boycott Facebook for live streaming 17 minuets of murder enters double digit days. This is not to say I have totally abandoned my friends there. I have used messenger to communicate, and received e-mail notifications for some of your posts.

But I have not "scrolled" my news feed for nine days. More importantly, I have not been looking at the targeted advertising. It is a small gesture, I know. However, I feel it important to take some kind of stand.

In a world where we all can take more control of our entertainment programming then ever before, we seem increasingly dependent on one source of information. Divide and Conquer is still a very real threat, and we have been severely divided in this nation.  I personally am experiencing a Red Neck Elitism in my part of the country. The "If you are not with us, you are against us, my way or the highway" set if you will.

If we keep being steered to the extreme right, or the extreme left, all we do is go round in circles.

We need now, more than ever, a more direct path to the future. One that does not treat the very real problems of our society like clay pigeons to be shot down for sport by people who would like to destroy our government.
Posted by MDRansom at 7:40 AM No comments: Links to this post

Welcome to day 2 of my 17 day challenge to myself. I will forego Facebook and all its trappings until the cruel month of April.

Today I celebrate the life of a man I never met, yet without whom I would not be. My grandfather, Stewart Ransom, passed this day in 1954 while watching the parade on TV.

Since then, St. Patrick's Day has always been a, let us say sedate, if not somber occasion for our family. Which is very out of character for us. (We like to party.) But I have never had the green beer, nor passed out drunk at any of the festivities.

When we were very young, my kid sister and I, were taken to the big parade down Fifth Avenue by our neighbor. We sat on the curb as so many marchers went by I thought the ground moved and the people stood marching in place. I caught a good glimpse of Mayor Lindsey, and an even briefer glimpse of Bobby Kennedy, for he was surrounded by photographers.

How did I know it was Bobby Kennedy? Mrs. Agnes Butts, our neighbor who had taken us to the parade, leaned out against the blue and white police barricade and shouted,

She talked about it all the way back to Mariners Harbor.


I do like to hear from my relations who tell me stories about "Pop". He was gone before I came along and I often wonder how different my life might be if he had the opportunity to influence me.

That is part of the mystery to life I indulge in these days, now that the pressure to be perfect at work is part and parcel of my retirement.

God Bless, and Keep you, Pop. Say hi to mom, and dad, and all the aunts and uncles. 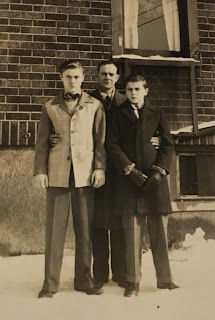 Posted by MDRansom at 7:40 AM No comments: Links to this post

So, for 17 days I will not look at their page, nor see their targeted advertising, nor promote in any way the use of that irresponsible medium.

Thank you to those who have found this page. Please comment. I will be posting here more regularly.
Posted by MDRansom at 7:29 AM No comments: Links to this post

From where it all began, Staten Island, I drove into work the morning of Monday, February 25, 2019.
The flood of thought and emotion has yet to subside. Later in the week my family and friends would gather for a festive evening. But not before I attended mass for a fallen hero.  A heartbreaking loss.

What follows here are a few snapshots and musings from my last week on the best job I ever had: serving the people of the City of New York. Along with a tribute to not only a great inspector, but also an amazing man. 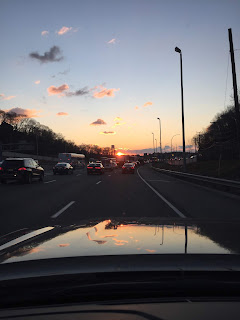 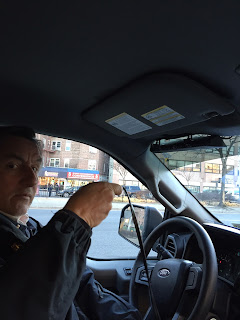 Not just leaving a job, but leaving. Leaving New York. A place of supreme pain and ultimate pleasure. The portal of possibility. Emerald City. My family. My home.

New York gets into your blood. Under your skin, it can torture and delight you all at once. Drive you insane with pleasure. Enrage you with envy. Misshape you with avarice.

NYC. Powerfully seductive. A barbiturate. Hallucinogenic opiate. Her old bones and new glass. Her power to create and to destroy the very molecules of dreams.

A place of unlimited and towering success. The nadir of failure. Heights reaching for the stars. Depths unfathomable to the gentle and naive. Love more powerful than time. Hate malignant and terrible.

For every action, equal and opposite ... lawless justice. Unkind civility. Camaraderie.

Always Greed driving mad drivers forward faster and faster until, one day, their wheels come off. And the only way to insulate yourself from the excruciating pain is to surround yourself with people. Family. Friends. Strangers. And things. Work. Play. Houses. Boats. Cars. Clothes. Art. Jewelry. Or...

Booze. Drugs. Sex. All the addictive forces of nature and chemistry, (Yeah, chemistry. ) conspire to console a challenged mind, a broken heart, a despairing soul.

Though we all come and go, The City remains. 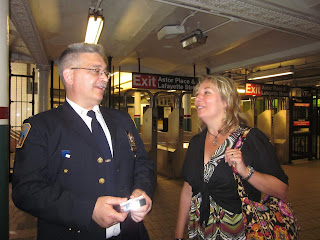 And amid my exit I am reminded of  life's real value. We lost Tommy Zurica. 59 years way too young, as he succumbed to his two year battle with brain cancer a week before my retirement. He coached me to the end on how to go about submitting my papers. These photos are from 2013 after receiving the Commissioners Award for Team Excellence. Tommy Z was the best of the best. 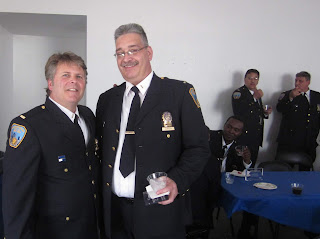 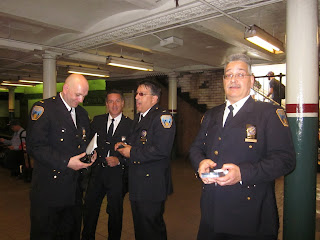 (from L to R) Willie Blake, Damon, Lenny, and Tommy 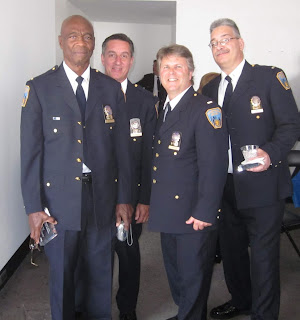 (from L to R) Scoffield Smith, Damon Boccadoro, me, and Tommy.

Posted by MDRansom at 7:14 AM 2 comments: Links to this post