Lost Everything Parts 1 & 2 and Storm Damage

The sea just kept on rising
Deep into the night

Time for survival
Was floating out of sight

Wind kept on lashing
With all of her might


An abstraction for most

Houses - Once Homes - Shells
Contents - Gutted By the Sea

That beautiful - mostly serene
Ocean - outside - the door
Rose from long, long slumber
With a roar
Exacting a price for life
Along her shore

Lost Everything – in the sound of gulls

Four houses disintegrated
A father missing, a young girl had died
Nothing left of their home
But a basement flooded by the tide

We inspected all the houses
The yellows, the reds, and the greens
To a man and to a woman
The worst we had ever seen

Sandy came, she claimed a crane,
And proceeded on inland
Covering much of downtown Manhattan
With seawater, darkness and sand

Debris keeps on rising
From Tottenville to Rockaway
From Red Hook, Coney Island, Breeze Point
People have no place to stay

The storm damage is in the Billions
Causing hardship, pain and strife
Meaning nothing to Tony Laino
Or the tree that took his life.

Posted by MDRansom at 7:31 AM No comments: Links to this post 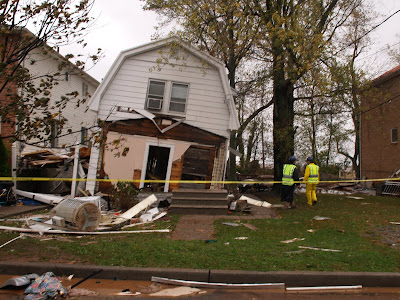 The Dutch Gambrel of this damaged home reminds me of the house I used to live in as a boy on Staten Island. I spent the first half of my life running the roads of Richmond County.

From Bay Street to Main Street, from the Kill Van Kull to Great Kills, this tiny borough of oddly named towns like New Dorp and Tottenville became famous for a bridge linking it to Brooklyn. To me it is much, much more than a punchline or a ferry.

Many who come here to Staten Island are baffled by the insular nature of our existence. Despite repeated insults of omission as part of New York City, Staten Islanders comprise an interesting cross section of its citizens. Many work in the financial industry, ferried to Manhattan daily to toil in the countless banks and brokerage houses downtown. It is one of the chosen enclaves of our Civil Servant work force including Sanitation Workers, Correction Officers, Police and Firemen, as well as administrators and trades people, small businesses and a large container port.

Proctor and Gamble, US Gypsum and Standard Chemical once employed thousands along the north shore. Now the children of those workers teach school, deliver mail, and drive the buses that connect people of every religion, creed and ethnic background on earth. All the while, even as time has marched on and the borough grew, it avoided the spotlight due to its historical nature as a remote destination only accessible by ferry.

Before it became very much a land bridge to New Jersey from Long Island, towns like Mariner's Harbor, Port Richmond, St. George, and Stapleton evolved out of the necessity of an industrial revolution's economy. What is now a sprawling, thriving, suburban bedroom community was once farmland, wetlands, and thick woods.

The prized beaches were the Jersey Shore of its day with a vibrant summer season where so many flocked from Manhattan and points north and west to avoid summer's relentless heat and the crowding of a vertical city. Over time the summer retreat of beach bungalows along Midland and South Beaches became year-round housing. Flooding in Cedar Grove has been perennial for as long as I can remember. But people love living by the sea, and I spent much of my adolescence biking or driving to Great Kills to enjoy low tide where you could walk out for almost a quarter mile on the dark brown sand and explore the marine life teeming in the ancient oyster and clam beds.

Even in the old neighborhoods and the new neighborhoods, there is a quiet peace and calm unlike most areas of Brooklyn, Manhattan, The Bronx and parts of Queens where the city thrum never ends. Not even in the darkest part of night.

Staten Island maintains its illusion of bucolic living in the midst of the most developed urban area in the world. Because when you are on a Staten Island beach and look out at the lower bay, from Coney Island to Sandy Hook, all you see is the horizon, and that was always, to me, a source of great inspiration for it still holds the mystery of a natural, unexplored world. An invitation to adventure, if only in the mind. The Siren's call of possibility gripped me there and has never let go.

The spirit of Staten Islanders is one of intrepid independence combined with enormous pride and steadfast ambition. The borough, of all NYC, lost the most people in the 9/11 attacks. It has seen its share of catastrophe, but never before on the scale and scope of Hurricane Sandy.

Along with Rockaway, Coney Island and lower Manhattan, Richmond County bore the brunt of an unprecedented storm surge. Homes have been washed off their foundations and many completely disintegrated. Thousands are without power, and many won't see it restored to their damaged homes even after the poles are replaced and the lines re-strung. You've seen the photos, now please help.

The Tunnels to Towers Run Foundation, organized in honor of Stephan Siller, a New York City fire fighter who on 9/11/01 ran through the Brooklyn Battery Tunnel and sacrificed his life in the service of others at the World Trade Center, is accepting donations with the promise that 100 percent of the monies raised will be used to help the survivors of Hurricane Sandy's most devastating effects.

I have long since departed "The Island, Our Island, Staten Island," first for a year of living dangerously in Manhattan's Theater District, then to settle in downtown Brooklyn where I live a double life as a New York City Building Inspector while pursuing the dreams I had on Staten Island's beaches as an aspiring writer in a region of highly accomplished artists. It was a complete irony that after spending the night of the storm responding to Manhattan, the Bronx and Queens, on Tuesday morning I was dispatched to help relieve the agony of my hometown. Now I am trying to do what I can to help raise awareness and funds for people who lost everything, my fellow New Yorkers, my neighbors, my Staten Island.

Remember, there is no donation too small.

Posted by MDRansom at 7:11 AM No comments: Links to this post 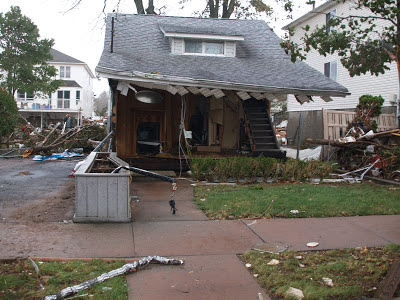 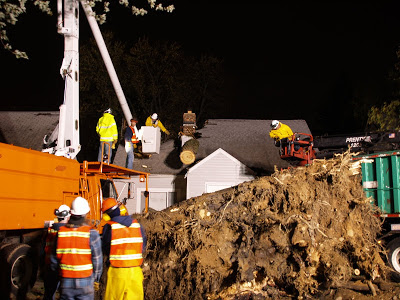 Since 9/11 New York City has largely escaped the woes of the country at large. We had had our own monumental hurdles to overcome. It was a slow, committed struggle back to normalcy facilitated by New Yorker's determined to be unbowed by circumstances beyond their control.

Hurricane Katrina touched us not, the housing bubble burst, (though did not make it possible for me to afford a home in my neighborhood). The economic downturn was barely a blip on the economic radar of New York other than to say the rich slowed on their getting richer. However, Hurricane Irene was a harbinger of things to come because Sandy delivered a punch that leveled the playing field and let New Yorkers in on the dirty little secret of what suffering, true suffering is all about. I dare say that 100 percent of all the affected people are of middle and lower income status.

Despite how my home was relatively untouched by the storm, no one is smiling on the streets here. We are all stressed out with coping. Today I came across two young kids sitting out front of Starbucks on Court and Dean. They claimed to be homeless and in need of cash. I denied them, thinking they were able bodied and young and should be out helping those displaced by Sandy, but as I went into the store to get my first cup of Starbucks for the day at 4:30 pm because I had been up all night manning a post at the Office of Emergency Management, I got angry with myself. I left and went home and had some two day old coffee from my coffee pot.

The rampant expansion of New York that has taken place over the last century had a big wake call, a thrashing at the hands of Mother Nature that will affect the area for years to come. The physical aspect is one thing, the social another. How will our fabric knit itself back into a cohesive whole after Sandy? That is the the question and the monumental task we as New Yorkers face today. After 9/11 our focus was clear. An enemy with a name and an agenda had attacked us from afar and we had to respond. Now, we have been made the victims of a natural disaster. How will we perform and stay true to our values? Who are we as new Yorkers?

Posted by MDRansom at 7:07 PM No comments: Links to this post

You are not forgotten, come hell or high water... 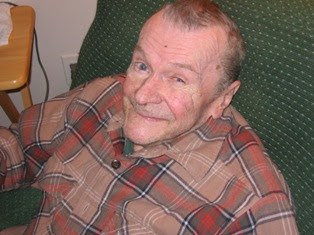 Posted by MDRansom at 6:34 AM No comments: Links to this post 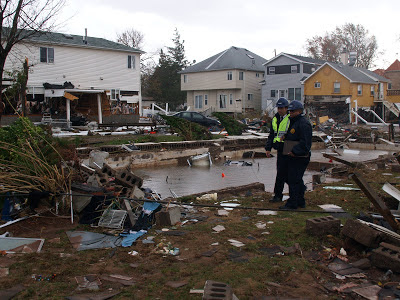 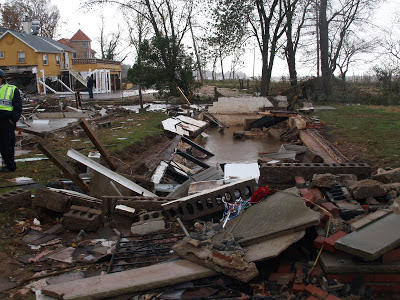 For almost a week debris has been stacked in neat piles from Far Rockaway to Tottenville along the eastern edge of New York City. Much of the wreckage has been carted away by relentless and seemingly tireless Sanitation workers. What remains, however is a gaping hole, a wound far deeper and wider than any tragedy in recent memory.

People are now isolated in their crippled neighborhoods without the basic needs of shelter, warmth, food and water being met in any meaningful way. The people who stayed are regretting their decision, the people who left, and are now coming back, are questioning every decision they ever made in their whole lives. Tempers are growing short, moral is low and folks are just looking for answers.

Its not like the response is non existent, it is tremendous, the largest in the history of the region, but it pales in comparison to the enormity of the task.

And this was only a Category 1 Hurricane. A Category 5 hit New Orleans.

Without going into detail I can report that NYCHA and LIPA crews worked through the night to restore even temporary power to the Hammel Houses in the Rockaways and to at least get the street lights and traffic signals working in an effort to bring some much needed light to the darkest night I have ever seen in this city.

Posted by MDRansom at 5:50 AM No comments: Links to this post