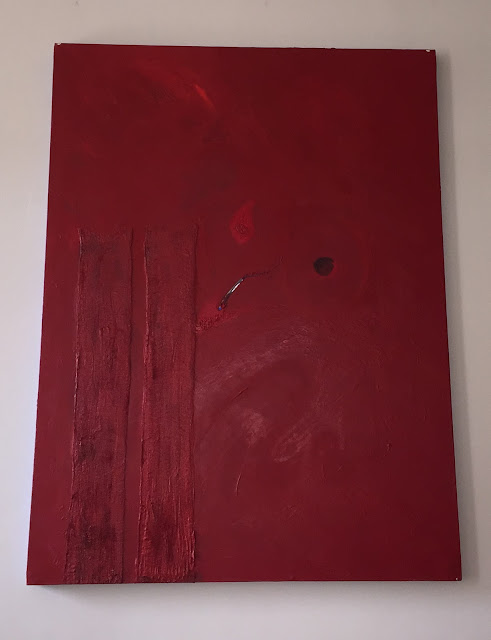 
The painting pictured here is mine. And it’s not mine. There is a story behind this painting. It is the story of New York. A before and after story. Before September 11th, 2001, and what followed.

Some may have heard of perceptual artist Paul Rebhan, who became somewhat infamous for smuggling a painting in to MOMA in the early 1990’s and hanging it in a gallery. Evidence of his notoriety archived in the New York Times, and an appearance on the Today Show with Matt Lauer, as well as other news sources positions him in the New York Art world before the death of Andy Warhol. He also, along with his friend and cohort Tony Noe, developed the idea of “Quiet Parties” where people gather and converse through writing notes. He is an author, musician, painter and all around agent-provocateur. Paul and I have been friends since our college radio days with WSIA.

In the 1990’s he presided over the Harper Gallery located in Tribeca at the corner of Hudson and Franklin Streets. It was a time in New York City, and in our lives, where all seemed possible.

As time moves on, so did we. I moved to Brooklyn in 2000, he moved out of the Harper Gallery to explore the world. He entrusted me with many of his paintings. One of which he bequeathed to me. The one you see pictured here.

When he gave it to me, it looked very different. Deep blue back ground upon which he painted his world famous “Orbs.” Abstract representations of the human form containing nine elements. There were other colors beside blue and black. One color conspicuously absent from the painting was red.

As you can see, the canvas underwent a transformation of sorts where-by color and texture not intended by the original artist were added after the fact. That defacement was perpetrated by none other than myself.

The canvas was painted over shortly after we moved from Wyckoff Street to Court Street in the summer of 2002. Paul helped us move. I worked for the Department of Buildings by night. By day I was dealing with the horror and anguish, along with the rest of the world, in the aftermath of 9/11.

Like many New Yorkers, I was suffering from a combination of survivor’s guilt and post-traumatic stress. I needed a release, a catharsis, a way to express my sadness…and my rage. I had never done a painting before. My visual art was limited to photography, mold making, casting architectural sculptures, and performance art.

In September of 2002 I was looking at the canvas my friend had given me. It reminded me of our days of Art Attacts and spontaneous performance pieces about love and sex. Days of seeming innocence. Now they were gone, and downtown Manhattan irrevocably changed forever. Having fun, being in love, sexual relations all seemed like things from a dream. And I was angry about losing my innocence. I don’t like when things leave me.

I have a problem with letting go.

So I went next door to the art supply store, KC Arts, bought a couple of tubes of Cadmium Red #5, and went to work. With a spatula, and some medical gauze, I fashioned the blood red impressions of the twin towers. I covered the rest of the canvas in red as well. Except for two of Paul’s elements which still show. All the rest of the texture in the painting belongs to Rebhan. Except the garish rectangles I used to deface his original.

When he saw what I had done, he was not pleased, and he immediately took back all the other canvas I was storing for him. No doubt fearing for their safety as well. My wife tells me artists re-purpose canvas all the time. That there are paintings under paintings. I never asked Paul if he had photos of the original, and I was so distraught back then I didn’t think to take any myself. Now I don’t want to bring it up again with him.

Soon, I will move. My wife never liked the painting in either of its incarnations. So I don’t know what to do with it other than donate it to the 9/11 Memorial and Museum. Provided this story could be told.

Retirement and moving away from NYC is about as big as it gets for me. I would like to leave something behind that moves people to work for peace.


Paul and I are still friends. I hope and trust we always will be. 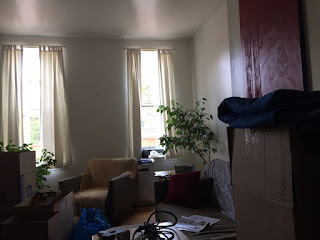 Posted by MDRansom at 10:50 AM No comments: Links to this post

My mother lies in state
This day
And everyday
Safe at last and forever
beside her husband
They share a semblance
Of sleep
Together in their crypt
While my father
Is ash in a box
On my shelf
I have yet
To fully grieve
For grief is
No departure
From my moment
To moment experience
Of life
I have always missed them
Especially when they were
Here
Now I know exactly where they
Are. And it's as if... 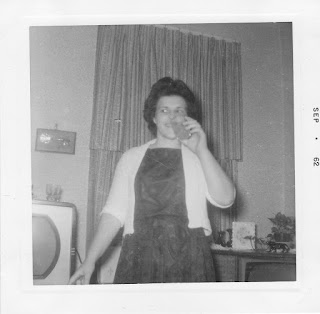 Posted by MDRansom at 10:35 AM No comments: Links to this post