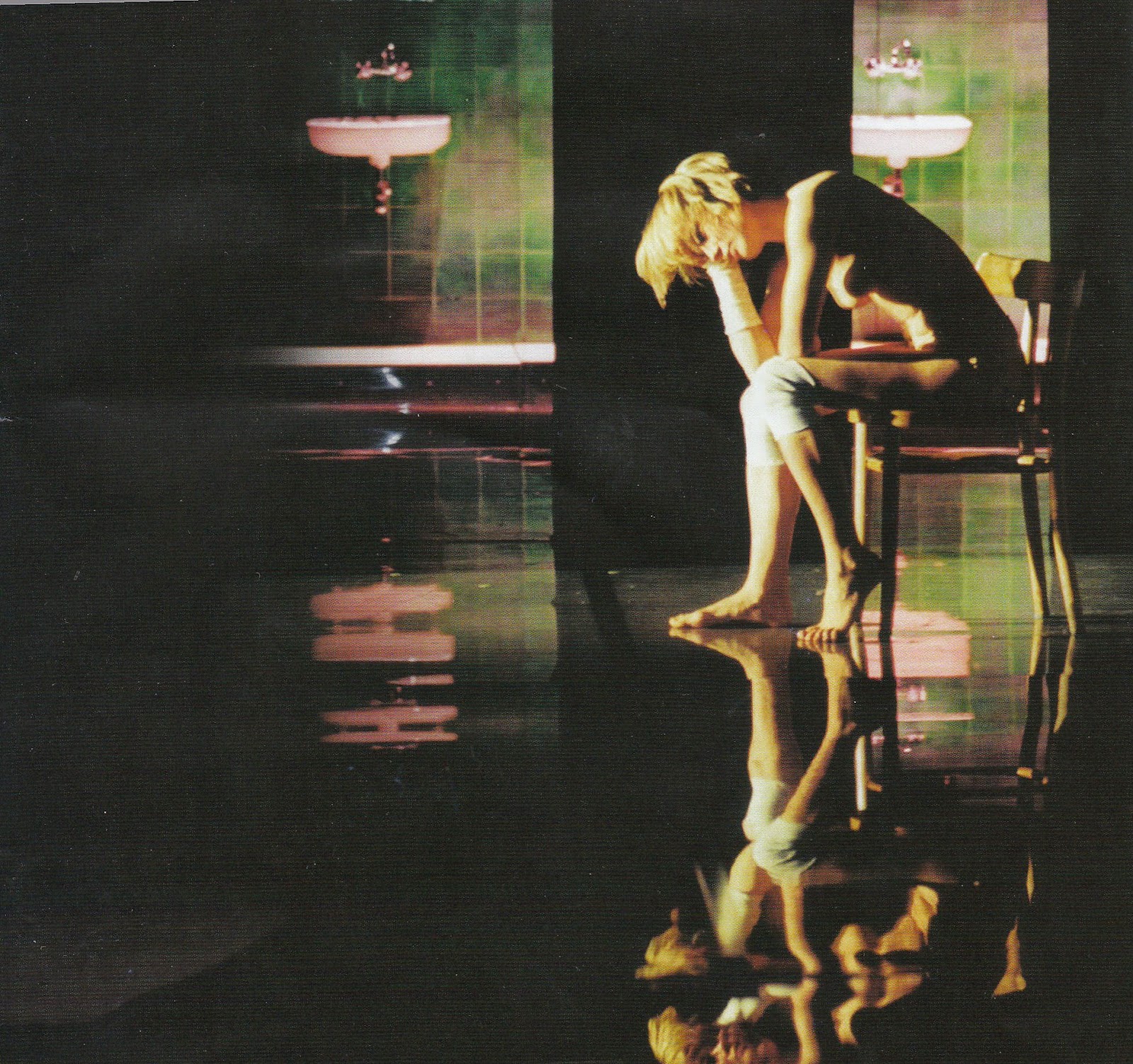 Saint Ann’s Warehouse is currently located at the beginning of Jay Street in Dumbo. The last event we saw there was an all-female rendering of Julius Caesar set in a women’s prison. The institutional theme plays heavily in the TR Warszawa production of Sarah Kane’s swan song: 4:48 Psychosis a play about a woman dealing with mental illness.

This theater changed me. It is the epitome of theatrical power to express and transform. Magdalena Cielecka is riveting as the tortured protagonist. By the fatal end, I felt as if when she was looking right at me; she was looking right through me. Exposing my fear, my truth, my guilt. I swear we made eye contact. I was the dark figure of her madness. The specter of death itself.

Adapted and directed by Grzegorz Jarzyna, I felt that I not only intimately witnessed the severe condition of a woman struggling to battle her affliction and express it through her art, but I also felt as if I was experiencing psychosis of my own. There were so many immediately identifiable and relate-able nuanced details that struck chords of truth like a dulcimer. By the end, the audience was torn to shreds.

My immediate thoughts jotted into my black berry on the subway trip home: Still stunned. I have seen greatness tonight. The searing truth. The truth kills. The audience is destroyed. The smattering of applause forced. No curtain call. No joy here. No vanity of craft. No need. All needs filled. Speechless. And thoughtless I am. Stunned into muteness...I will be landing in this for a long time. Sarah Kane was an English playwright whose plays deal with themes of redemptive love, sexual desire, pain, physical and psychological torture and death. Her plays feature poetic intensity, pared down language, exploration of theatrical forms and the use of violent stage action. Kane committed suicide in 1999.

Precision. That is how I would describe the quality and skill with which Sarah Kane's 4:48 Psychosis eviscerated me. I came away from this performance with a new empathy for my fellow creatures. If you staged T.S. Elliot’s “Wasteland,” this is how it would look.

"I gassed the Jews. I bombed the Arabs. I raped the children while they begged for mercy." most probably the most horrid speech ever uttered in any language on any stage. And yet all I could feel was beyond profound pity for this miserable being. Profound pity and direct connection to parts of me experiencing the exact same condition. This tortured individual with whom I share so much, if not so intensely and severely, this same madness, is the “other” I recognize in myself.

Despite the final lines of her poem, Kane will never vanish. But this staging goes away on October 26th. In Polish with English super-titles.

Posted by MDRansom at 7:19 AM No comments: Links to this post

Usually my reviews are from in and around NYC. Welcome to my first road review! 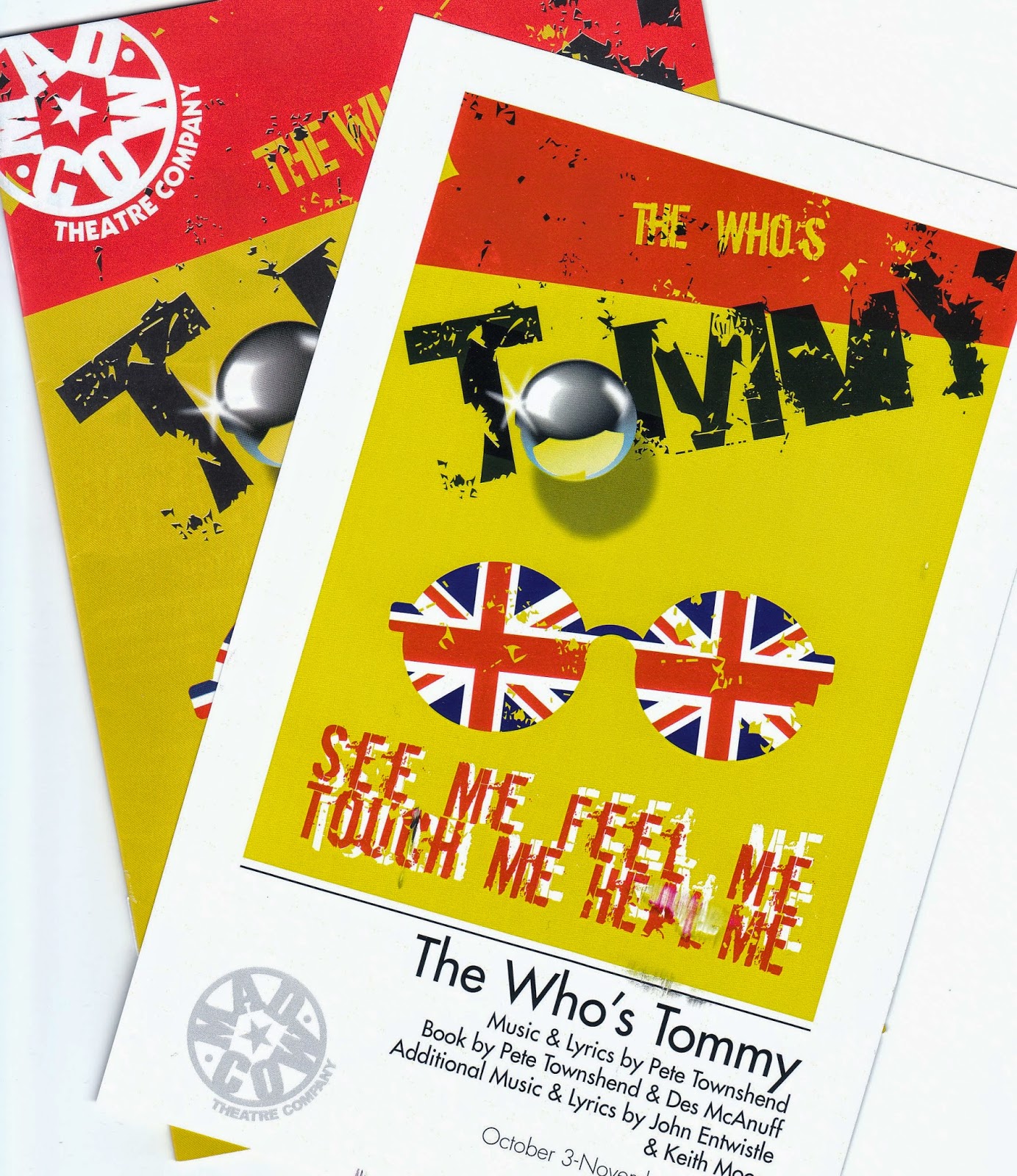 In 1975 I was having the best year of my life up to that point. I was a junior in high school, I had a beautiful girlfriend and Tommy was made into a film starring just a bunch of my favorite celebrities and artists. When the Rock Opera came to Broadway I was in a different place and I never did see the Broadway production. So when my beautiful wife suggested we go see a staging in downtown Orlando as part of out 11th wedding anniversary celebration I was so pumped!

I will be cruel only to be kind in this review.

Firstly let me commend the ensemble and all the leads. They were individually and collectively magnificent. The energy and commitment projected from that modest stage blew the roof off and kept my toe tapping and my seat rocking through out. Nothing could hold them back. Not the casting, the concept, the costumes or the set. Their brilliance lit the night sky of Orlando. Kudos to the musicians, costumer, scenic designer and choreographer as well.

A staging like this makes me want to go back to grad school and get my MFA in directing. With my biggest peeve the blocking during the opening moments of the Acid Queen number. I missed the entire opening tableaux because Captain Walker and his little son Tommy stood directly in front of me. If they wanted to see the Gypsy, played by the lovely Valerie Witherspoon, in all her revealing glory...they should have bought a ticket like I did and sat in a seat so everyone else could see!

I wanted to shout: Yo, I'm from Brooklyn! Down in front!

Other than that...I don't think it would be productive to go into further detail. My emotional attachment to the material may cloud my judgement. Though my wife, who had never seen the movie or the musical before, and knew nothing of the story going in, had a billion questions for me afterward. Such is life in the theatre!


Ciao for now.
Posted by MDRansom at 9:41 AM No comments: Links to this post 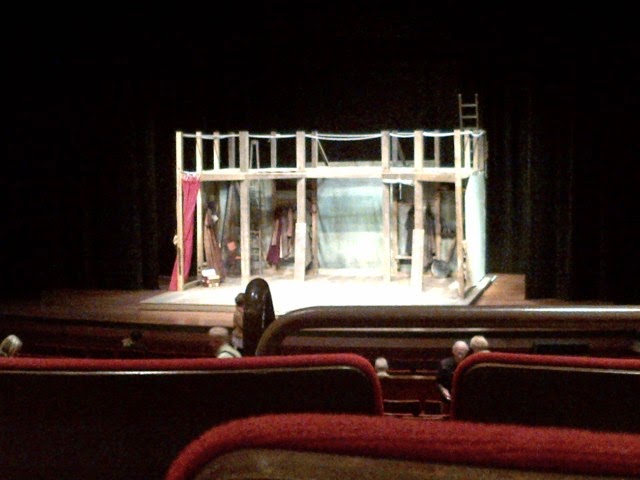 It resembles a dolls house, (not the play, but literally). This is the functional set of a Shakespeare's Globe interpretation of King Lear now playing here in New York City at NYU Skirball. in the West Village.

I must admit, I was a bit trepidatious about going to see Shakespeare at the Skirball again. The first experience was a disastrous deconstruction of Othello with the late Phillip Seymour Hoffman playing  Iago.

No such high concept employed here. Pure Shakespeare as only Shakespeare's Globe seems to be delivering these days. That means the house lights stay on, the audience is included in the fun (in Shakespeare's day, the "4th wall" had not been invented) and a fresh, lively interpretation of text is delivered with great pacing, acting and stagecraft.

The last Lear I saw that had the same, bare bones, honest quality was when The American Bard Theater Company did it a few years back.

Joseph Marcell as Lear is sublime. When he declares "I am a man!" you will not be able to escape the message so timeless and subtle, yet so powerful and contemporary. He sent chills through me.

Yes Jacobi was inventive with his whispering of the speech during the storm on the heath. Yes, Langella was a powerful physical presence and "every inch a king." But the stripped down versions of Shakespeare's Globe provide a more accessible pathway to the words, the poetry, the music of Shakespeare.

In recent productions of Lear, that poetry, that music, would flash like lightening. In Shakespeare's Globe, the deluge of artistry never stops.

According to Executive Director of Skirball, Michael Harrington: this "...marks the beginning of our new partnership with Shakespeare's Globe..." Meaning we can look forward to more and more of this wonderful, exciting, and enlightening style of theater.

Bravo Globe. Bravo NYU Skirball.
Posted by MDRansom at 6:36 AM No comments: Links to this post