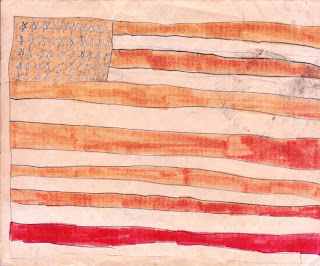 Tomorrow we mark the 8th year since the passing of my father. Sunday will mark 15 years since terrorist suicide bombers destroyed the World Trade Center. Life altering moments.

This year, we will build a home. This year we will celebrate all the hard work we have done, the service rendered in an effort to heal the wounds of a city, the wounds of a man.

This year I want my 9/11 Post to find Samantha Fossella, a grade school girl on 9/11, her hand-made card graced my locker at 280 Broadway since we moved there in early 2003. As my mind emerged from the fog of war, I saw her flag as a symbol of hope for the future. I want to find Samantha Fossella and thank her from the bottom of my heart for the encouragement her work of art and craft gave me in my darkest hours. For many years, I felt I had no right to live while so many died. I truly struggled with what turns out is a very common condition called: Survivor’s Guilt. Why had I been spared? Why wasn’t I the one to die on September 11th, 2001?

Slowly and painstakingly, I forced the conversation away from what didn’t happen to me, and began to focus on what I could do to make the world a better place, what could heal New York City and contribute on a long term basis to its safety and security. I am truly grateful to the Department of Buildings in New York City and to the Inspector Training Academy of Buildings University for the opportunity to express my grief and sorrow in a positive, productive way. I have been fortunate to be entrusted with orienting aspiring inspectors in a world of law and code. The blueprint, if you will, we all use to challenge the real world of brick, concrete and steel, to Build Safe, and Live Safe.

A lot of folks think I drank the Kool Aid; that I am under some mind control influence. If I did, it happened long ago in classrooms not unlike the one in which Samantha Fossella took crayon to paper. I want to thank her teachers, and all my teachers some of whom made the ultimate sacrifice themselves, or some who had their own children die in wars defending the flag. I am, ironically, anti-war. Anti-violence is an ideal of mine, but when violence finds you, and you are attacked, one must defend one’s self. I prefer to fight violence with Peace and Love. I prefer to inspire others to do the same. Today I want to thank Samantha for fighting violence with a peaceful message to all the folks who went to the rescue. Her act rescued me. 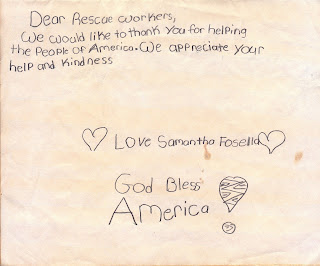 Posted by MDRansom at 7:36 AM No comments: Links to this post