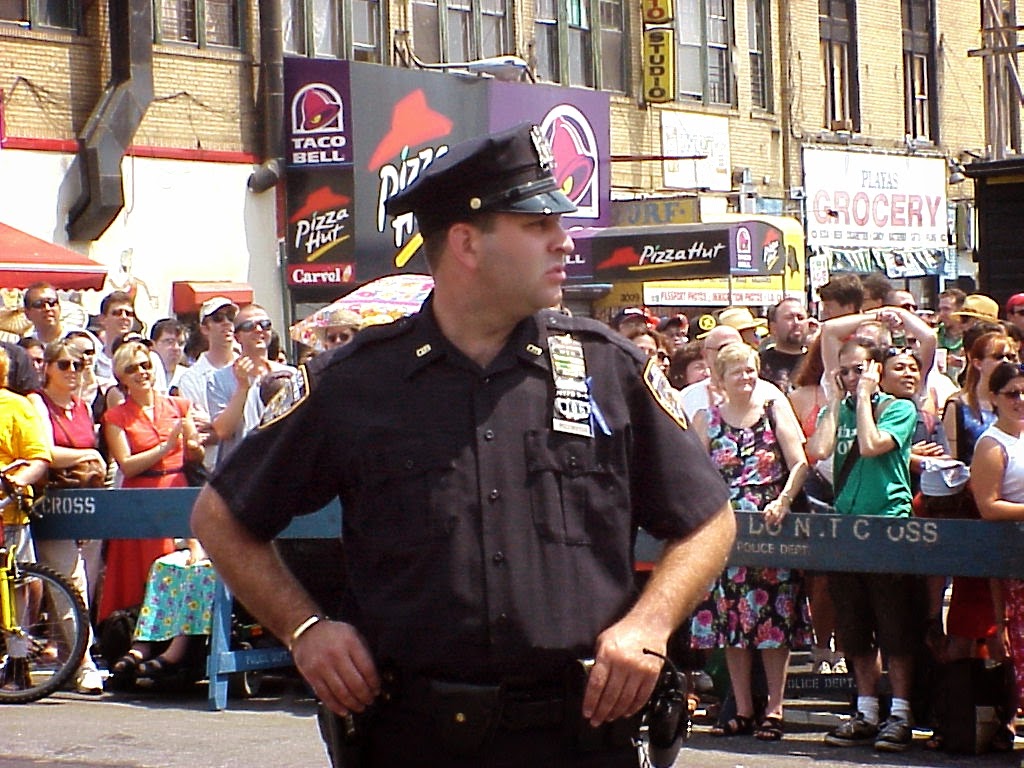 http://www.washingtonpost.com/posteverything/wp/2014/12/06/i-was-a-st-louis-cop-my-peers-were-racist-and-violent-and-theres-only-one-fix/
If you think the racism that the author of this WP article described is exclusive to the police department, you're living in a fantasy. A liberal bubble where you cannot see the forest from the trees. Racism is everywhere and it crosses all ethnicity. Not everyone is a racist, but the very laws protecting minorities also protects racists. Freedom of speech, of religion, prohibitions on discrimination based on color, creed, or religious affiliation protects liberals and racists alike. Our society is woven of these disparate elemental threads. The question no one wants to address is how do we evolve into a more ideal society where people are not judged  solely on their appearance without destroying the whole cloth? Blaming the men and women who are trying to keep the peace is certainly not the way to go about it.
If we had no violent criminals, we would have no need for a violent police response.
Here's an analogy from OSHA. Once a worker willfully and knowingly disregards a safety protocol and behaves in a dangerous manner at work, the law no longer protects that worker.
Once people break the law in the presence of a police officer, that person is subject to some type of enforcement. All the media is ever showing is the enforcement of the law, not the breaking of the law. If you believe that there are not folks intentionally trying to provoke the police into scenes of violence you are dangerously naive. Are there bad cops? Sure and yes, they need to be weeded out. But the police are those we need to weed out bad people from our buildings, our neighborhoods, cities, towns, counties, and states. Thieves, rapists, violent offenders, and anarchists whose sole agenda is self-motivated chaos need to be held accountable for their actions.

Obey the law. If you don’t like the law then change the law. Do not blame law enforcement for doing their jobs.
Posted by MDRansom at 8:44 AM No comments: Links to this post

Pocatello is the most recent play by Samuel D. Hunter at Playwrights Horizons.

Eddie manages a failing restaurant in a small town suffering the fate of corporatization. The state of our nation’s economy plays a not so subtle role here as this nondescript chain, perhaps Olive Garden or something very similar, is governed by the bottom line. Technically the inciting incident is news about the place’s imminent closing. Eddie has his demons, not the least of which happen to be that he is an openly gay man in an area almost devoid of gay culture (Eddie’s mom Doris can’t even say the word “gay.”) All of the action takes place in one dining room.

Troy is Eddie’s longest employee at the restaurant. He is married to Tammy, his high school sweetheart, and is the meat in our sandwich generation’s dilemma between a bulimic 17 year old daughter, Becky, and a father who recently had been committed to the County Care facility suffering the early stages of dementia. Of course, Troy and Tammy’s marriage is in trouble. Becky wishes they would divorce and get it over with already.

Denial plays a big part in the play. Nick, Eddie’s older brother seems to be well-adjusted as he was able to move on, marry, and become a successful real-estate broker in Minnesota. He and his wife, Kelly, take every opportunity they can get to travel as far away from Pocatello as possible. The inciting incident for this play, for me, happens more than 20 years in the past when Nick and Eddie’s father commits suicide after the failure of his own diner. Nick explodes with incredulity as Eddie tries to serve a dish their father’s menu once featured.

It is clear Eddie lives in that past, pining over the old family homestead which is rapidly deteriorating on the edge of town and long since passed from their domain. He has refused to tell his employees that their livelihoods’ at the restaurant are about to be terminated. His character arc peaks quickly and as the plot unravels, so does he.

One of the most fully developed characters, along with Eddie and Troy, is Becky. She goes through the play with a traditional arc and is clearly the most changed by the end. She comes to some kind of terms with the blatant and infuriating hypocrisy of life. The scene between her and her grandfather, Cole, who just wandered out in a classic Silver Alert, and walked five miles from the home to end up in the dining room, was almost metaphysical in the way Becky changed from his touch and a kiss on the forehead. It was as if he was physically passing some great unspoken pearl of wisdom from the wise old sage whose dementia is both disturbing and enlightening, to a ferocious young spirit struggling with harsh reality.

Hunter has the ability to make you feel a part of the extended dysfunctional nuclear family. Using mostly kitchen sink realism, he engages his audience by highlighting the most disturbing aspects of any given situation…in this case two families whose sole connections is the small town in which they all once, or still, live. A few of the characters may be a tad underwritten, like Nick and his wife, or the waiter Max suffering from meth addiction or the waitress Isabella, suffering from a lack of opportunity in a small town? But they are electrons caught in the orbit around the protons and neutrons of the play. As directed by Davis McCallum, all the actors shine in their roles.

Hunter taps in to our primal attachment to nostalgia with the lightest touch of sentimentality. He reminds me of another Sam who dealt with the family drama of Americans and practically invented Heightened Realism. That would be Sam Shepard.

Posted by MDRansom at 9:10 AM No comments: Links to this post 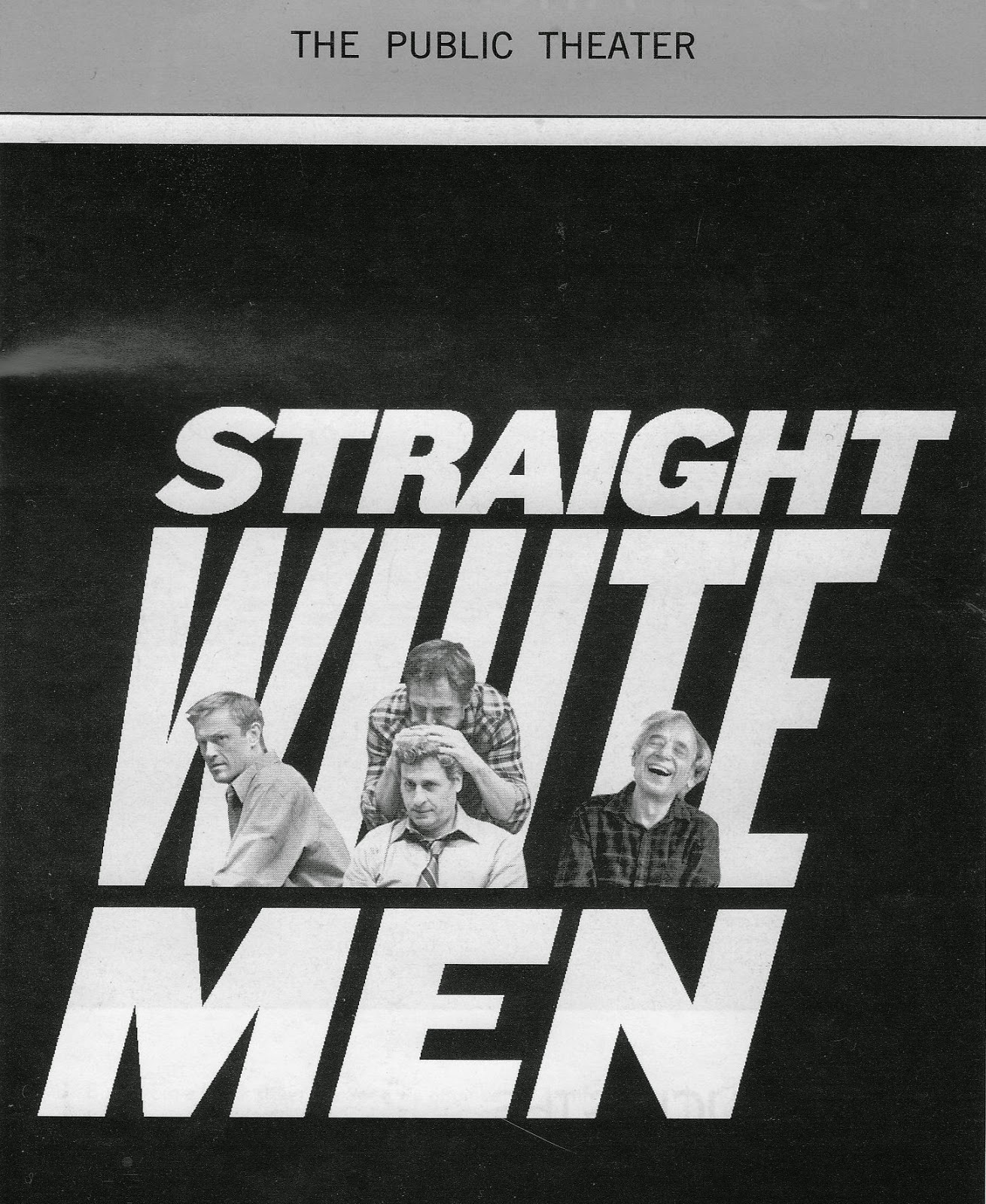 Straight White Men by Young Jean Lee is either a brilliant play by an up and coming playwright or an excuse to explore normally incendiary topics (to the GOP) in a frivolous manner. I must admit I had a few laughs and was prepared to see the play by a plethora of previously published material, including an interview with the playwright featured in American Theatre magazine.

I saw her Untitled Feminist Show a few years back which was perhaps not the best way to be introduced to her work. As I read her bio, and about her process, and production history, I decided she needed to be seen again. In what she calls her first attempt at “realism” I experienced a cleverly crafted portrait of Straight White Men saying things we hear them say every day, or rarely ever hear them say, but imagine that they do. Or might.

First things first. The most memorable part of the play comes before you get through the door of the theatre where my companion and I were treated to a scene which went something like this:

Usher is standing in the door scanning tickets. He is tall, slim, and young and wears a head-set with ear-piece and microphone.

LOL- Excuse me. (to usher) Excuse me is this music going to be playing the whole time before the play?

Usher- What? (He can’t hear her and stoops to get closer.)

LOL- I say, (Raising her voice as high as she possibly can.) Is this loud, offensive, obnoxious music that should be only played late at night in a strip club, going to be playing the whole time before the play?

If you entered the theatre upon opening of the house, you were treated/subjected to… an ear splitting hip-hop mix over which conversation spiked with anticipation was not possible. To many this was a sophomoric prank at best. Young Jean Lee, whose motto is: Destroy the Audience invokes Silenus, the satyr, and makes sure there is some offense right from the get.( I dug it and was rocking in my seat much to the consternation of my companion.)

While she maybe did not destroy her audience, she did her best to destroy their ear drums. I am sure she was working her “Alienation Affect” bone…with a generous amount of lube, but was it worth it?

Oh, yeah, then the lights went down and there was a lovely play.

Posted by MDRansom at 8:13 AM No comments: Links to this post