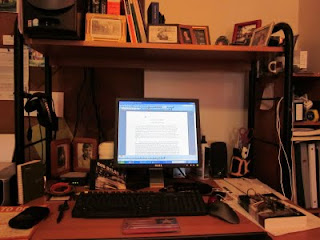 I've been a bit remiss with my blogging lately because I am in the middle of composing my first novel. Literally, in the middle and now I am starting to frighten myself a little. I might just finish the thing. With the help of God and two friends...so I thought I would begin to blog about it in a way to challenge myself to stay the course. As of this week I am at 142 single spaced pages and roughly 60,000 words.The goal is a minimum of 71,000 words, but no more than 120,000 which is acceptable for a first rough draft I am told.

The working title of the tome is "PORT RICHMOND". Here is an excerpt from a chapter I have been working on called "The Trial".

Ominous clouds, dark purple, and gray descended over and around the Empire State Building. Forks of lightening spiked out of the sky as if aimed by a malevolent, unhappy god. Foreboding as this was, more dangerous to the two, lone, tiny figures of men suspended on a scaffold hanging on the east elevation, was the roaring wind. It began to swirl in all directions. Angry blasts against sheer limestone walls created down drafts, and up draft which tossed the platform about like a row boat on high seas. The two men were almost in the middle of a drop on the tallest part of the building, the fifty stories between the 25th and the 75th floors which creates a monumental vertical rise giving this stately, landmark tower its prestigious position as the tallest building in midtown Manhattan.

The men had made several egregious errors. One was not listening for the weather forecast. The second was they failed to bridal the running lines to the structure every three floors or so. The tethers would have prevented high winds from blowing the scaffold nearly across Fifth Avenue. Then slamming it into the facade of the building as it swung back. 911 calls were coming in furiously from all over the city as local news cameras broadcasted the harrowing ordeal. The terrified men were not wearing safety harnesses. They were nothing more than paralyzed passengers clinging to the back rail of a scaffold, frozen in utmost fear for their lives.
Posted by MDRansom at 2:41 PM No comments: Links to this post

Email ThisBlogThis!Share to TwitterShare to FacebookShare to Pinterest
Labels: Work 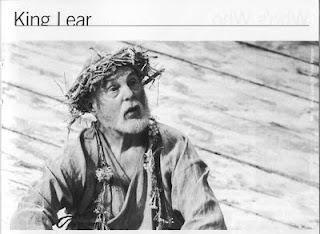 CAN'T GUSH ENOUGH ABOUT THIS. Derek Jacobi's Lear was stupendous.
Posted by MDRansom at 8:31 AM No comments: Links to this post