Some things are better not photographed. Yesterday on my walk around my Brooklyn hood, I saw a dead sparrow on the sidewalk. I thought of Hamlet and his line. "There is special providence in the fall of a sparrow." He is referring to Mathew 10:29 of the St. James Bible (1611). "Are not two sparrows sold for a farthing? and one of them shall not fall on the ground without your Father."


"one of them shall not fall on the ground without your Father."

This illustrates perfectly my problem with interpretations of the Word. In King James the interpretation that the Lord is with all creation at all times is both comforting and infinite, where all this about "permission", "consent" and "will" in the latter days seem specious attempts to usurp the power of spiritual love and use it for the sole purpose of subjugation.

"one of them shall not fall on the ground without your Father. " We are not alone. Our faith is always with us. That's my interpretation.

Permission, consent, will...perversion. I am no theologian. But my challenged faith comes from interpretations such as these. Fear of the other drives malice forward in the name of good. In the name of God.

Our country, connected by technology, faces many moral dilemmas. What if we choose the old intent of the word? Unconditional love. This ancient radical idea of forgiveness, understanding with the reassurance that nothing happens to us without our Father, our God, our maker, with us. Always.

Moral compassion for the other. For the victims of violence. For the persecuted. I do believe in omens. Omens for good, for change.

"There is special providence in the fall of a sparrow."

Fear no darkness. People must be free to love whom they chose. Freedom from tyranny, freedom of religion are the basis of this nation. Definition of marriage and of family are free to be determined by what ever religion you wish. But it cannot be legislated by government. Marriage as a secular concept is not defined by gender or sex. But by commitment.


Equality. This is the special providence of We the People. It is a never ending struggle to achieve it.
Posted by MDRansom at 8:11 PM No comments: Links to this post 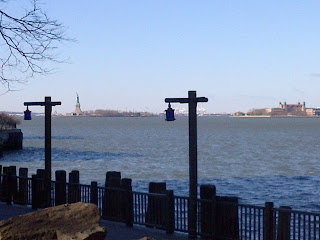 This view is from Battery Park City overlooking the bay. It's rumored the Vernal Equinox took place recently. Were we still in tune with the natural world we may sense the spectral scent of April lilacs lurking in a subtle undercurrent on this bitterly cold breeze. Spring time is clearly feminine, coming when she wants, and not a moment before.

These doldrums have me languishing, I have work enough to do. My novel needs re-writing, my blog needs tending, my bike needs riding, my wife needs loving, but I am stuck, stuck, stuck. I enjoy going to work for the Building Department for the ridged structure of the day. I have been staring at this computer for a week. And it's not like I don't know what I need to do. I am just thoroughly disgusted with this crazy winter.

Determined not to let this defeat me, I am blogging in an effort to shake my self awake, though dreams have been interesting of late, and I really am getting into my Netflix Game of Thrones...as more and more becomes clear about what my novel needs, the less I am inclined to dig in. This is the opposite of writers block, more like writers constipation. No jokes about an enema please, the politically correct term is colonic.

Add to this condition a renewed yearning, masochistic as it may be, to return from self imposed exile and begin performing on stage again. I've actually composed a new song, one that appears in the novel. Which in turn distracts me toward technology available, I am certain, where I can record and distribute the tune without having to leave my living room.

It is Sunday. I am taking the opportunity to reflect, read the papers, (or the ipad in my case), and give myself a break from all my recent bad habits. So rather than keep my loved ones guessing about what I am up to...here as indication of my current situation. Most people would love these problems and I am counting my blessings. Thanks all for caring to share this page with me. Here's looking forward to spring...after the snow storm predicted for tomorrow, of course.
Posted by MDRansom at 8:28 AM No comments: Links to this post