Measure for Measure not a “Problem” for director Natalie Doyle Holmes 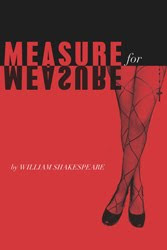 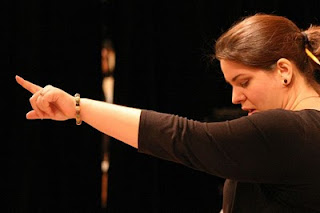 Focused, determined, energetic, passionate, Natalie Holmes directs the American Bard Theater Company in their forthcoming production of William Shakespeare’s “Measure for Measure” which is known as one of the Bard's "problem" plays for various reasons. The thirty year old Actor/Director and Dramaturg for ABTC is working hard on making this production a success. I caught up to her the other day before rehearsal to ask a few questions.

MDR: Where did you grow up?

NDH: I like to consider myself a "Tri-State Area" Girl. I was born in Brooklyn, NY... moved up to the Catskill region...moved down to Paramus in Bergen County NJ and grew up in the Paramus school system until I graduated high school. When I went to College it was more moving back and forth between NY/NJ, making stops at the American Musical and Dramatic Academy, Brooklyn College, and then ultimately Montclair State University where I completed my BFA in Acting and went on to get a MA in Theatre Studies there. Now my husband and I are back in NY living in Astoria...so I am definitely a product of the Tri-State Area.

MDR: When did you get the theater "bug"?

NDH: When I saw my first Broadway show at the age of four. It was The King and I starring Yul Brynner. My father claims that I sat still through the entire show and watched every move they made, later picking out the differences between the movie and the play when we rented the video.

MDR: Who is your most influential mentor or teacher in theater?

NDH: Wow, that's a hard one. I can't chose only one because they have all either taught me what to do or what not to do, so in some way they have all been extremely influential. If I had to chose...they would be Jorge Cacheiro, an undergrad professor I had at MSU, who taught me how to really connect with your onstage partners, Debbie Saivetz, a graduate acting professor I had at MSU who really taught me the importance of ensemble work and being true to yourself as an artist and John Basil, who is one of the most amazingly gifted educators of Shakespeare, (how to read it, act it, think it, breathe it) at the American Globe Theatre in Times Square. Dr. Jane Peterson would be my first choice for a theater educator outside of the realm of acting and directing...as a Dramaturg she taught me how to look at a text from all angles, dissect it, and look at the world and its history to use as a major source of creativity in the theatre.


MDR: What was your first exposure to Shakespeare?

NDH: Probably on Sesame Street somehow, back when Sesame Street was intelligently written...but from what I can actually remember, it was freshman year of High School when we studied Romeo and Juliet. I already knew who Shakespeare was, but I had never read any of his work. I told my Mom what we were reading and she exposed me to the movie version starring Olivia Hussey. After that, I became obsessed with watching movie adaptations of Shakespeare's work on video through out High School. That's why I was so honored to have been able to play Beatrice last spring in American Bard Theater Company's Much Ado...I had watched and loved Emma Thompson's Beatrice since I was 15yrs old.

MDR: What is your most memorable experience of the Bard?

NDH: In John Basil's class, when I first felt the mysticism of Shakespeare's language lifted. I don't claim to be an expert, but from that moment forward I was not afraid of the text anymore, it became fun rather than overwhelming.

MDR: What is the most challenging aspect of staging Shakespeare for the American audience?

NDH: Making it fresh and new for a New York City audience in a studio theater setting. We want to honestly tell the story …find the humanity and not get lost in a concept.”

MDR: What attracts you most to Measure for Measure?

NDH: It was originally said to be a comedy, and somewhere along the way it became a tragedy, I’d like to highlight the comedic aspects.

MDR: Why is it important to continue performing Shakespeare?

NDH: Because Shakespeare's poetry and plays still speak to us as human beings in an ever changing society where history repeats itself. Each artist and audience member can always find a Shakespearean character they can relate to on some basic human level. As for theater as a whole, Shakespeare's plays are accessible, universal in themes and malleable. They remind us that, no matter what time period you are from or what part of the world, we are all still human beings, connected to each other by common emotions, struggles, and triumphs.

Email ThisBlogThis!Share to TwitterShare to FacebookShare to Pinterest
Labels: Interview

Anytime you get the chance to see a George Bernard Shaw play, you take it. Add to the mix an American treasure of the stage, Cherry Jones, and you have the makings of a memorable theatrical experience. The production values are first rate. Even the audience was full of luminaries like Neil Simon himself and actor Alec Baldwin. Cherry Jones delivers and thank goodness she did. Any other actress may have wondered what she had gotten herself into. Costumes and sets were absolutely magnificent, all the male actors were worth their salt, and Cherry Jones was superb. I am leaving someone out because I don't think I can decide on weather I did not care for the actress or the character she portrayed. Reviewed elsewhere will be the actual trappings of the performance, I was really impressed with the social consciousness of the text. "Shaw was a feminist," I said to my wife at intermission. "Yes," she agreed. "Sort of." I think feminists today would be as appalled by a play about the glorification of the oldest profession as the public who first saw this play were back in the day. However, this was a clever way to point out how women were second class citizens in the 19/20th Century and how the battle for equality is far from over here in the 21st. Despite this plays glaring short coming, it is still a must see for the fans of Shaw.
Posted by MDRansom at 6:41 AM No comments: Links to this post 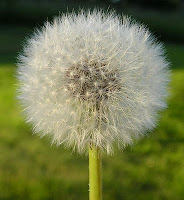 Leaves, branches, whole trees falling all around this season so far. We did a reading for White Horse last Saturday night and it felt good to do a little acting again. One thing leads to another they say and the FACT Company has picked one of my ten minute plays for their Words and Wine Series. October 24th at 3:00pm at Joria Productions- 260 West 36th Street, 3rd Floor in NYC. Very excited.

Jennifer and I just celebrated out 7th wedding anniversary. I am lucky to have her.

Got word from Paul Rebhan he sent me a slew of photos from Europe where he and Marcy are doing a victory lap around France and Italy after Paul's battle with Cancer. I am so happy for them. They look great and we hope to see them soon!

It is with great sadness we mark the passing of the father of a co-worker of mine. Anthony Carbone, my heart felt condolences go out to you and your family at this difficult time.

May God Bless and keep you all as Fall, this beautiful fall winding toward Halloween!
Posted by MDRansom at 7:56 AM No comments: Links to this post