"Words, Razors and the Wounded Heart" 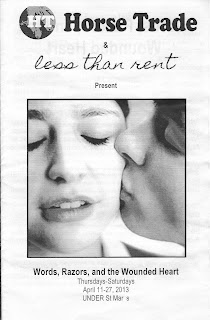 James Presson's "Words, Razors, and the Wounded Heart" opened last night in an east Village cellar theater aptly named UNDER St. Mark's; a space reeking of creativity and passion. There the angst ridden passage from adolescence to young adulthood was on virile, painful display as presented by Horse Trade Theater Group & less than rent theatre. Spring Awakening this was not, and I mean that in the best possible way.

The actors through-out absolutely vibrate with the thrum of sexual energy and intellectual frustration as their characters deal mainly with each other in an insulated enclave of suburban dystopia. I don't want to begin to name names because they all do such a fantastic job. I can't gush enough. There were so many wonderful moments. It was an uplifting and exciting inspiration to be in the same room with them. Fine work.

Director Jake Ahlquist sets a frenetic pace in the first act and despite the blatant use of cliché, gratuitous sex, violence, moral taboo, misogyny, homophobia and racism, a gritty, down and dirty, no holds barred glimpse on how these young folks perceive their world is brilliantly depicted by an ensemble of talented and capable actors. At least for the first act and the start of the second. After a tragic event which should have been the play's climax, the wheels come off the speeding freight train. But just because the story goes off the rails, doesn't mean the play has to.


As often happens with young playwrights grappling with such material, James Presson, who obviously studied his classics well, is perhaps too close to his characters to, pardon my over-use of cliché, see the forest from the trees. The long, drawn out sequence of events that constitute his third, fourth, fifth and sixth acts, (as each individual sub-plot climaxes) could have used some workshop time before subjecting an audience to what devolved into a soap opera like ending. I am being cruel, only to be kind here, because what I saw last night was overall really, really good. And worth the time and effort. It was true art on so many levels. When I left the theater I knew exactly what happened. Sometimes a play thinks it has to take care of its audience. For the first act and a quarter I was destroyed, which is how I like to be when I see good work, I was blown away. I've paid a lot more money at firmly established theaters and not been so impressed.

But I felt mid-way through the second act I was being treated like a person who did not speak or understand the language this playwright established in his first act. The way scenes overlapped and melded into one another in a fresh take on the Elizabethan tradition pretty much disappeared. The pace slowed to a deadly crawl as bodies began to litter the stage like the end of Hamlet. Moments like when one man was about to kill another man, but could not because he loved him, did their best to redeem the last excruciating minuets, but what really needed to die was the urgency to rush this brilliant piece of work to the stage.

All that being said, if you enjoy being on the edge of greatness, and in the presence of those whom you will most assuredly see in more mainstream work down the road, it is worth it.

Thumbs up for those with true intrepid hearts and a love for new theater.

Posted by MDRansom at 8:35 AM No comments: Links to this post