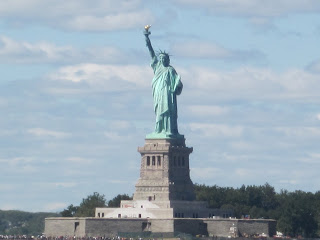 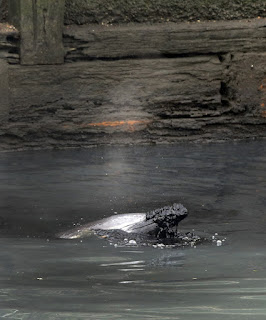 
In a rare act of eco-activism, a dolphin committed suicide in the Super-Fund wastes of the Gowanus Canal. The determined animal made its way almost to the end of the infamous inlet, finally coming to its final resting place between Union and Sackett Streets in Carroll Gardens, Brooklyn, New York.

This is the first documented case of eco-activism perpetrated by a dolphin protesting the deplorable conditions in the long polluted industrial waste site since it was assigned Super Fund status by the United States Environmental Protection Agency back in 2010.

On-lookers stood by helplessly as the doomed animal breathed its last breaths. However, before its life was completely spent, in a heroic gesture benefitting all humanity, the dolphin scrapped at the sedimentary muck of the canal with its nose and displayed it to the crowd in an effort to draw attention toward what a sad state lies at the bottom of this legendary waterway.

Rescuers were hoping against hope the animal would change its mind and abandon its plan, but those hopes were crushed with the setting of the sun. An necropsy is being performed to determine the exact cause of death.

Last fall this poet wrote a brief verse about the Gowanus:


It sits still
and nicely there
object of my fixation

Highway miles above you
so to bumper to bumper drivers
you appear as an
Asp slithering
from Liberty Bay.

Statute of Liberty by MDRansom

AP photo from Huffington Post of dolphin in canal. For more go to:


Posted by MDRansom at 10:13 AM No comments: Links to this post

Cat on a Hot Tin Roof! 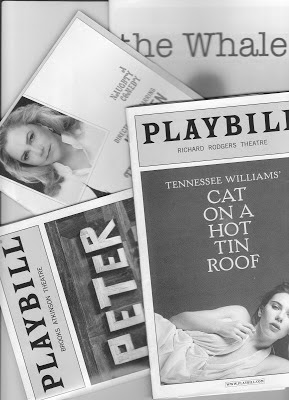 During the whirl-wind winter break, Jen and I tried to catch up on a season of theater going...and then some. Not in chronological order...impressions follow.

Our Christmas celebration included a treat of theater: Tennessee Williams' Cat on a Hot Tin Roof which was everything you could hope it to be. Brilliantly cast and acted with a set that would make the late John Scheffler proud. Would love to see it again.

Cat on a Hot Tin Roof with Benjamen Walker, Scarlett Johansson, Ciaran Hinds and Debra Monk! A memorable experience we will cherish for a life time. Fully engaged, delivering the play, Walker as Brick and Scarlett Johansson as Maggie rock Broadway.

Johansson's take on Maggie is a bit trashy, a lot sexy and way smart as she plays down the blatant sensuality of Williams' frustrated femme fatale (if that's possible as she struts and bellows about for the first third of the play in a slip), but she plays up where Maggie comes from and what's at stake for her. Walker's Brick is quintessential, totally detached and looking for the "click" in the bottom of a bottle of Bourbon until Maggie pours a little salt on his open wound. Just to make sure he is still "alive" as she is. Ciaran Hinds as Big Daddy and Debra Monk as Big Mama give fresh takes to the legendary icons of theater history. We saw it in pre-views, it opens January 17th.

A close second to Cat,a recently closed Playwrights Horizons production of the Whale, written by Samuel D. Hunter and directed by Davis MaCallum, the power of this play is not so much in its text but in the visceral tragedy played out on stage which made us all feel like we were together with the cast in the belly of a whale along with Jonah seeking redemption.

Thirdly we saw Peter and the Star Catcher (finally) delighted by the perfect performance of all and especially none other than a personal favorite of ours Matt Saldivar. Closing January 20th, but re-opening at New World Stages! A great family show.

I also saw, on my own, American Bard Theater Company's production of King Lear by Shakespeare, which I absolutely loved. So good!!!

Posted by MDRansom at 2:10 PM No comments: Links to this post 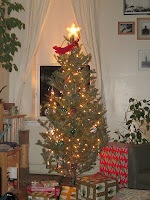 I ended 2012 and began 2013 on a sour note battling this monstrous flu that has been going around. Being laid up has given me more time than usual to reflect on things. Today was one of my first days out and I went to the Book Court to cheer myself up on a dark day in this dark time of year. I purchased two volumes of Philip Levine poetry. In one is scrawled an autograph by the author, and I thought myself fortunate, but then decided to check it against my 1991 autographed copy of "What Work Is" to compare, which led me to the hiding place for the last birthday card my father ever gave me.

Which leads me here, back to blogging in the New Year. May it be a year of pure poetry.

Of Guldens Spicy on Whole Wheat

My words, plucked from the air
like breath
meandering and undisciplined
never exhibit Mercy
at my own expense
and form awkward sentences
which often make no sense

But I love a good
Genoa salami sandwich
because of you and What Work Is
In spite of you, too
I do

Continue
Posted by MDRansom at 12:19 PM No comments: Links to this post