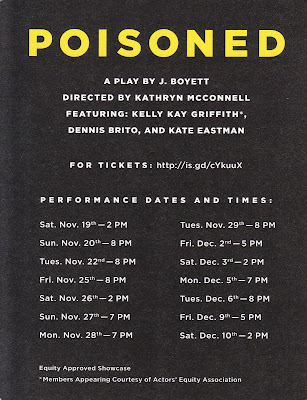 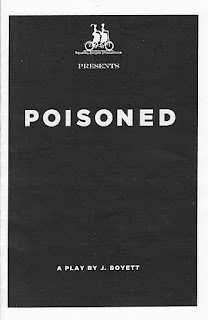 We took in a staging of a new play by J. Boyett last Saturday and I am writing to let you all know there is still time if you want to see an exciting play explore a troubling trend in our age of techno instant gratification. Without giving too much away I will just say the ride starts slowly, but once it picks up speed the emotional twists and turns are non-stop.


Samantha (Kelly Kay Griffith) is Sam's (Dennis Brito) younger sister and she has flown almost 2000 miles to talk to her brother about his upcoming nuptials to a considerably younger Dee Dee (Kate Eastman). What ensues, directed by Kathryn McConnell, is a lively and sometimes hilarious debate on morals, generational differences and sibling rivalry.


The radiant Kelly Kay Griffith and luminous Kate Eastman sizzle as they square off to compete for the respect, adulation and love of Dennis Brito's "Tom". A man who proves unworthy of either powerful women. An insipid secret is at the nexus of this play. Both what it is doing to society as a whole and what it specifically does to these three people is revealed.The play deals with its issues not in a preachy, showy way, but presents the dilemmas and tragic consequences with jarring realism. This is an interesting effort by Boyett who has a strong sense of drama and a keen ear for poetic dialog delivered beautifully at times by his actors.


In the end, a women's issue is eclipsed by obscene, misogynistic objectification. Thought provoking and disturbing, it was well worth the 90 minutes without intermission.
Posted by MDRansom at 9:05 AM No comments: Links to this post