The Bermuda Tri-Angle of Court Street 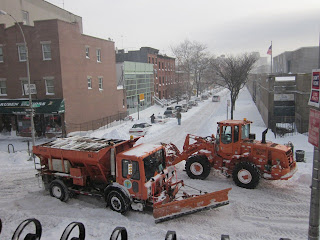 All night long, I mean from two in the morning until nine thirty...every manner of vehicle got stuck in front of our building at the intersection of Court and Baltic Streets! The most ironic being the salt-spreader, pictured here with a front loader coming to his aid. Even an RMP(Radio Mobile Patrol) from the 76th Police Precinct was stuck at around six!

The first thing one wonders is why anyone would think it a good idea to drive a little egg beater race car with front-wheel drive, over inflated tires and about six inches of road clearance into a blizzard. Really, the little spoiler mounted on the trunk-hood did no good. That noisy sucker was stuck for an hour, at least, without a clue of even how to drive in the snow, and with several good Samaritans helping to no avail. Again he was one of many. One of my favorites was a couple who got out of their yellow cab with suitcases in tow, obviously either returning in defeat from the airport, or triumphantly after a trip. I wonder how far they had to walk.

I was truly amazed at the sheer number of cars on the road between 2 and 6 this morning. If anyone complains about the roads not being clear, you only have these fools to blame. Roads cannot be cleared with disabled vehicles strewn all about! Those who were stuck outside my door blaring horns at four in the morning like it was rush hour on Friday, no doubt got stuck again after leaving this triangle. I bet they wished they heeded the advice of people who know better. The should have stayed home!

Only in Brooklyn.
Posted by MDRansom at 6:37 AM No comments: Links to this post

This, That...and Another Thing! 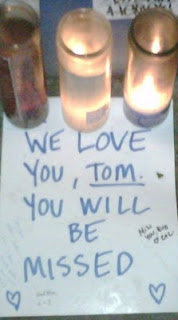 Its coming on one year since our favorite door-holder and smile giver, Tom of Court street passed. It has been quite a year where we saw his beloved Yankees fall short in their quest for championship number 28. The street itself has gone through seasonal changes with eateries opening and then closing and then opening again as something new.

From Court Street to Broadway, I think I have seen more in the theater on boards of the famous mid-town houses than ever before, and there too, shows have come and gone. The knock on productions like Bloody, Bloody Andrew Jackson or The Scottsboro Boys is that they were not ready for Broadway. The opposite is more likely: Broadway was not ready for productions that ask audiences to think while they are being entertained. This can be the only explanation for the long running success of a show like Mama Mia, and a short lived shooting star like Bloody Bloody Andrew Jackson.

Speaking of thinking...what was America thinking last November at the polls when we decided it would be a good idea to deny health and compensation benefits to the responders of 9/11? What were we thinking when we voted to increase the deficit and give more to the people with the most leaving those of us in the middle to suffer through with no relief in sight?

It's gotten so bad in New York that now the City wants to charge you for pulling you out of your burning car and taking you to the hospital to treat your injured body because you stopped short for a cyclist who refuses to use the bike lanes your tax dollars paid for in the first place...but I digress.

I was remembering Tom, his gentle smile, his keen observations, his sage wisdom about the important things in life like how cold it was going to get, or if we would have snow, or if the Yankees would win it all next year. During this holiday time, I lift my glass to his memory, Brooklyn Man, Man on the Street, Tom, we hardly knew ye. Fist bump to you in Heaven. I think John Lennon would have liked Tom.

The 30th Anniversary of Lennon's brutal death was marked the other day, I was at work, traveling far and wide in the Big Apple. As I listened to his music and his last interview on the radio I was reminded of who I am, how back in 1980 when I was 22 and I had no idea what the hell the guy was talking about. I just knew it was something radically good, but how now, respect for women, respect for the planet on which we live, love and respect for each other are as current issues as ever. Lennon's feelings about all that is what he expressed through his art. These are the things I value as well. Now that I am old enough to understand, now that I have lived through war and social ennui, now I can better relate to what he was saying about "making it through," and it was a whole lot more than just:"Give Peace a Chance". Now I raise my voice to join the chorus and sing..."So this is Christmas...and what have we done?"

Ransom out!
Posted by MDRansom at 8:18 AM No comments: Links to this post